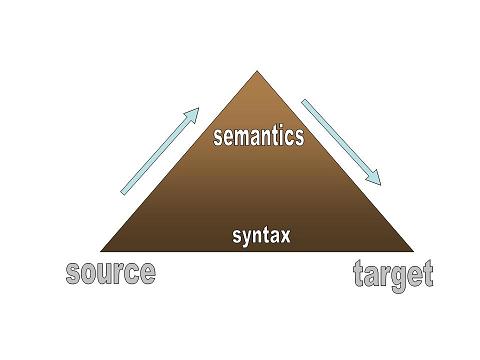 The individual words and their grammatical combinations create what is known as the syntactic layer. The syntax is the carrier of the meaning, the vehicle for expressing it. Above that is a more abstract level of meanings and concepts, the semantic layer. The translator's task is in fact to distil the meaning of the syntax of the source text, and then express those semantics naturally in the target language.
This process is shown by the blue arrows in the diagram on the right.

A grammatical error does not necessarily destroy the meaning: non-native speakers can communicate perfectly well in their second or third language. It is also possible for a single sentence to be interpreted in more than one way: syntax leading to two semantic alternatives. This is obviously a source of ambiguity: the translator can see one alternative, whereas the author intended another. It can also be done deliberately for humorous effect - humour that will be lost in the translation except in the rare cases where the duality of meanings can be replicated.

The error: syntax only

The example shown on the right is an old favourite, with a small dose of schoolboy humour of course. But despite the exaggeration, it serves to show the problem: the literal translation, word for word at the syntactic level, is incorrect. The purple arrow produces a valid target sentence, but meaning something totally different.
The translator must go via the semantic layer above (the blue arrows in the third diagram).

In many cases, particularly for simple factual sentences and for languages from the same group, the syntactic method will work. That doesn't make it correct, however!

This is also the major area where machine translation is going to continue to fall down for the foreseeable future. The automated systems are becoming increasingly able to take the raw words and convert those, and the efforts to produce sensible target language grammar will improve fast too. However, the human's approach of using the semantic layer is still a long way off. 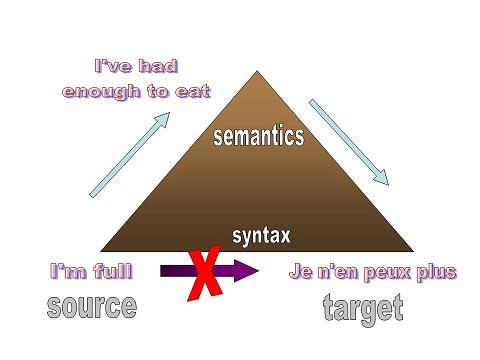 Oddly enough, this problem is particularly acute when the source and target languages are closely related. Tessera is based in the Netherlands and has two native English speakers, so the combination of Dutch into English is obviously our mainstay. In two languages that are close cousins, it is relatively common for the purely syntactical translation to work relatively well. This misleads many Dutch clients into not realising that the semantic layer is required (or even exists), or into expecting that a literal translation is possible and correct, and (with grim regularity) into thinking that they speak English better than we do.

When translating from Dutch into Chinese, for example, you have almost no choice but to do it properly.

A similar problem can arise at the sentence structure level (it is particularly common for Dutch into English translations, unfortunately for us): that English permits different sentence structures for the same meaning. "This year, we made a profit of five million dollars", or "We made a profit of five million dollars this year." Both are fine. However, Dutch generally uses the first structure and English the second - unless perhaps you are trying to emphasize a change from previous years. But it is very simple and tempting to retain the Dutch structure in the English. Once or twice is fine, but ten times in a row and the resulting text soon has a "translated" feel to it.